Why, despite the coronavirus pandemic, house prices continue to rise.

During the global recession a decade ago, real house prices fell by an average of 10%, wiping trillions of dollars off the world's largest asset class. Though the housing market has not been the trigger of economic woes this time, investors and homeowners still braced for the worst as it became clear that covid-19 would push the world economy into its deepest downturn since the Depression of the 1930s.

That pessimism now looks misplaced. House prices picked up in most middle and-high-income countries in the second quarter. In the rich world they rose at an annual rate of 5%. Share prices of developers and property-traders fell by a quarter in the early phase of the pandemic, but have recovered much of the fall. 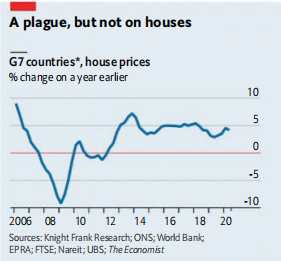 Some markets are fizzing. In August house prices in Germany were 11% higher than the year before; rapid growth in South Korea and parts of China has prompted the authorities to tighten restrictions on buyers. In America growth in the median price per square foot accelerated more quickly in the second quarter of 2020 than in any three-month period in the lead-up to the financial crisis of 2007-09. Three factors explain this strength: monetary policy, fiscal policy and buyers' changing preferences.

Consider monetary policy first. Central bankers around the world have cut policy rates by two percentage points on average this year, reducing the cost of mortgage borrowing. Americans can take out a 30-year fixed-rate mortgage at an annual interest rate of just 2.9%, down from 3.7% at the beginning of the year. Studies suggest a strong link between falling real interest rates and higher house prices. Some borrowers can afford to take out bigger mortgages; others find it easier to manage their existing loans. Landlords are willing to pay more for property, because yields on other assets have dropped. In both America and Britain, mortgage lending is running at post-financial-crisis highs.

That is not to say that it has become easier for everyone to borrow. In fact, obtaining a mortgage has become harder for many. Brokers, fearful of the long-term economic impact of covid-19, have pulled back on riskier lending. British banks, for instance, are offering fewer high-loan-to-income mortgages. In America few loan officers at banks said they were tightening lending standards before the pandemic; now 60% do. In contrast with previous periods of strong house-price growth, there is little evidence of lax lending standards.