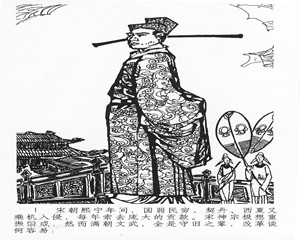 A nation thrives when it appoints and utilizes talents, but it declines when it neglects these talents and its ruler monopolizes everything. This is irreversible—true in the past and true at present and known even by common people. But how is it that a nation in good order can thrive with its talents while a nation in chaos cannot in spite of its talents? This is only a matter of whether talents are utilized or not. If a nation utilizes them, a good fortune will come to it; otherwise, it is just as though they do not exist. There were talents like Zhong Hui and Yi Yin when Shang was flourishing, but as it declined, there were also three talents. There were ten talents making a concerted effort for the King when Zhou was on its rise, but on its fall, there were also talents like Duke Zhai Moufu and Nei Shiguo. There were talents like Xiao He, Cao Can, Kou Xun, Deng Yu, etc. in the prime of both the Eastern Han and the Western Han, but on their downfall, there were also a great number of talents like Wang Jia, Fu Xi, Chen Fan, and Li Gu. From Wei and Jin down to the Tang Dynasty, there were too many talents to list, but again there were talents for both thriving and declining periods. Looking from this perspective, it is indeed good fortune for a nation when there are talents and they are utilized, but they are as good as nonexistent if these talents exist but are not utilized. We could not afford not to be cautious about this!

Things at present and in the past are identical: today’s world is like yesterday’s and today’s people are like yesterday’s. There were as many talents as mentioned above at times of chaos in the past; how can we say there are none today when we are at peace? It is solely a matter of whether high officials utilized these talents.

Inquire among the masses and talents will be found; if there are no taboos, the passages for honest advice will be open; if there is no pampering of snobs or sycophants, then they will not approach; if there are no literary restrictions and conventional scruples, then people on duty will have lucid judgment in fulfilling their responsibilities; if there are no punishments for lapses, then able officials will be able to give their full play. If we strictly abide by these principles, how can we not surpass the Two Hans and exceed the Three Dynasties to scale the same flourishing heights as the Three Kings and the Five Lords?